If you have been charged with Assault do not hesitate to contact our experienced Criminal Defence Lawyers, who specialise in Assault charges, fines & penalties to get the best possible representation for your matter.   (02) 9261 8640

An assault is any act, and not a mere omission to act, by which a person intentionally, or recklessly, causes another to apprehend immediate and unlawful violence (R v Burstow; R v Ireland [1998] 1 AC 147). Part 3 of the Crimes Act 1900 (NSW) (‘Crimes Act’) contains provisions, which stipulate various ways in which a person who creates apprehension of an imminent harm or offensive contact with another may be charged. 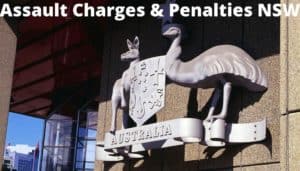 Common assault (s61) in NSW carries a maximum penalty of 2-year imprisonment. This sort of assault charge occurs when individuals are charged where one assaults another person but does not cause an injury amounting to bodily harm or grievous bodily harm. A court can impose any of the following penalties for a common assault charge: prison sentence, periodic detention, intensive correction order (previously periodic detention), suspended sentence, community service order (CSO), good behavior bond and/or a Fine. A charge for common assault may also be proven and dismissed (s10; non-conviction). Similarly, a charge of assault occasioning actual bodily harm (s59) carries a maximum penalty of five years imprisonment, with similar powers to the court. Possible defences to a common assault charge include but are not limited to: self-defence, self-defence of another, provocation, accident, duress, and necessity.

Where reckless wounding occurs as denoted by s35(4) (i.e. A person who: wounds any person, and is reckless as to causing actual bodily harm to that or any other person, is guilty of an offence), the offender may be imprisoned for a maximum of 7 years. Where the offence is committed in company with another person (s35(3), the maximum penalty is 10 years imprisonment). Individuals are charged where a person wounds another person causing actual bodily harm but does not an injury amount to grievous bodily harm. In order to prove an injury amounting to recklessly causing grievous bodily harm (s35(2)), the court must be satisfied beyond reasonable doubt that the offender sought to induce injury (the physical aspect) and did so recklessly (the mental aspect). This offence carries a maximum penalty of 10 years alone and 14 years if committed in the company of others. It is to be noted that defences such as duress, necessity, and self-defence are available for all s35 offences.

In NSW, the charge of Intent to Cause Grievous Bodily Harm (s33) charge carries a maximum penalty of 25 years imprisonment. People are charged with this offence if they assault someone with the intent to cause, and do cause, a very serious injury. If you are convicted of the offence, it will appear on your criminal record and the court can impose any of the following penalties: prison sentence, intensive correction order, suspended sentence, good behavior bond, community service order, fine or a section 10 order dismissing the charge.

Where an unlawful act or negligence has resulted in grievous bodily harm (s54), a maximum period of 2-year imprisonment exists. Possible penalties include: Prison Sentence, and Home Detention amongst others.

Interestingly, minimum mandatory sentences are now in place for one-punch offences in NSW. Following the introduction of “one punch laws”, a mandatory minimum penalty of imprisonment for persons that cause of death of another person in particular circumstances exists. The elements of this particular offence are as follows: (a) An assault; (b) By intentionally hitting; (c) With any part of the person’s body or an object held by the person; (d) The assault not being authorised or excused by Law; and (e) The assault causing the death of the other person.

This particular charge is serious in nature for aspects of the crime are treated stricter than charges occasioning manslaughter (Maximum Penalty: 25 years). A person prosecuted for ‘Assault Causing Death’ is liable to imprisonment for 20 years. This increases to 25 years where the assailant is intoxicated. While the definition of “intoxicated” is not clear from the legislation, it indicates that someone with a blood alcohol level of 0.15g/L would be regarded as being intoxicated. Further, ‘Assault Occasioning Death’ whilst intoxicated they face a mandatory minimum non-parole period of eight years. This is significant because the most manslaughter penalties lie between three and six years non-parole.

That is, this law would on average impose a heavier penalty for ‘Assault Causing Death’ than would have been imposed had the offender been prosecuted for the offence of manslaughter.