Weapon offences vary from possessing a knife to being a prohibited person in possession of a firearm. Issues that arise out of weapon offences are whether there was a lawful excuse for possessing the weapon, and how it ended in the accused’s possession. George Sten & Co are experts in criminal law with over 50 years experience. For comprehensive legal advice on weapon offences, visit our Sydney CBD office, or call us on 9261 8640. We are also available 24 hours a day on 0412 423 569.

Weapon offences are very serious and the courts are very harsh when handing down penalties. Did you know that possessing an imitation firearm can be a weapon offence? Altering identification marks on weapons is also an offence. 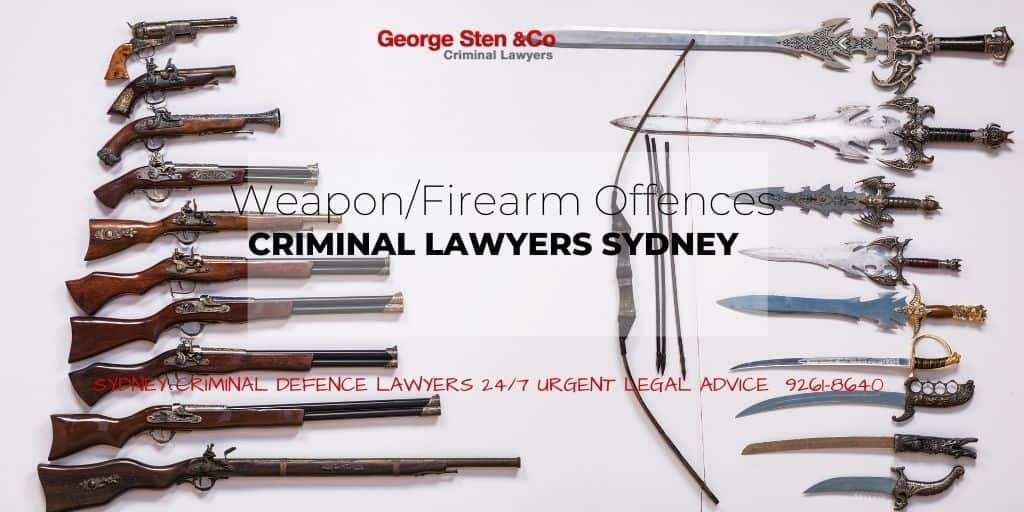 (1) The underlying principles of this Act are:

(a) to confirm firearm possession and use as being a privilege that is conditional on the overriding need to ensure public safety, and

(b) to improve public safety:

(i) by imposing strict controls on the possession and use of firearms, and

(ii) by promoting the safe and responsible storage and use of firearms, and

(c) to facilitate a national approach to the control of firearms.

(2) The objects of this Act are as follows:

(a) to prohibit the possession and use of all automatic and self-loading rifles and shotguns except in special circumstances,

(b) to establish an integrated licensing and registration scheme for all firearms,

(c) to require each person who possesses or uses a firearm under the authority of a licence to prove a genuine reason for possessing or using the firearm,

(d) to provide strict requirements that must be satisfied in relation to licensing of firearms and the acquisition and sales of firearms,

(e) to ensure that firearms are stored and conveyed in a safe and secure manner,

(f) to provide for compensation in respect of, and an amnesty period to enable the surrender of, certain prohibited firearms.

Weapons included on the offences list can be obscure but are still prohibited by the law, such as Chinese throwing irons, crossbows, knuckledusters, thumb cuffs, nunchakus, and kung fu sticks.

George Sten & Co lawyers inform you of the consequences of having a weapon offence charge. Weapon offences are very serious, and the law is onerous. Call us now on 9261 8640 or 0412 423 569 to know your rights and how we can protect them.